Hell’s Half Mile, Lucifer, and Fear 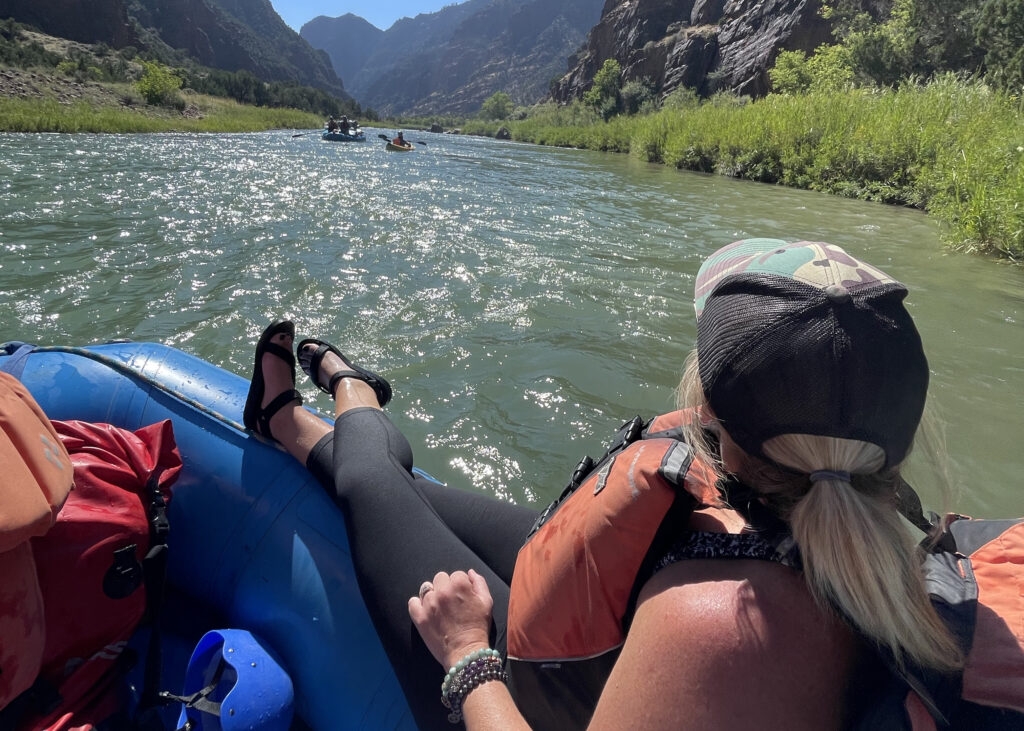 “You’re going to want to stay straight going down this rapid. Whatever you do, don’t go left,” advised our river guide. “Also, don’t go too far to the right. And be careful of that big drop.”

I was on the banks of the Green River somewhere (either Colorado or Utah depending upon the day). There were 17 of us—all strangers a short three days ago—yet now I would put my life in their hands. And, in actuality, I was that day, as we were going down “Hell’s Half Mile,” a Class IV rapid at some points with the sneaky Lucifer boulder creating a tricky drop halfway down.

Our group stood on the side, surveying what we were about to (hopefully) float down on rafts. There were also three brave souls who were going down this portion in what the raft guides called “duckies,” which were essentially blow-up kayaks. One such brave soul was Robbie, who is possibly one of the wisest, most interesting people I’ve ever met in my entire life.

“You ready for this Robbie?” I said with a smile, patting him on the back.

“Oh sure,” he said. “This sort of thing really doesn’t bother me. In my past life I was suicidal, so I’d free dive down rapids like this—no boat, no helmet. It’s funny what you do when you’re not afraid to die.”

He said it so nonchalantly, but his words seemed to burrow themselves straight into my soul. He walked away to get on his duckie. I stood there in a sort of frozen contemplation.

What is it like to not possess any fear?

I was here in Utah (or Colorado?) on a retreat with the Hart Collective. Led by Joe Hawley, the company offers retreats, courses, and services all about “leading from the heart.”  On a whim, I had signed up for this retreat a mere three weeks prior when a friend (and client) texted me about it.

“It will be right up your alley,” she wrote. “Breath work, yoga … all kinds of goodness.”

Whatever it was speaking to my soul, I knew one thing: I had to go. There are times in my life when my gut speaks loud and clear, and I know to listen to it. This was one of those times. So a day later I registered for the retreat and booked my flight, not even entirely sure what I was signing up for.

Three weeks later, I was on the banks of the Green River with a group of strangers who, to be perfectly honest, seemed much more in tune with themselves than I had ever been. We stood in a circle holding hands and sharing our intentions for the trip. Some simply said peace, others mentioned things going on in their lives that they wanted to work through, and then it came to me.

I looked at this group of earnest faces, and out of nowhere, tears began streaming down my face.

The guy next to me put his arm around me, and I said, somewhat sputtering, “I need direction.”

The next five days, we floated down the river all day, and we camped on the shore at night. Each day had a theme with exercises that brought us closer to our own hearts, offering clarity to what we were meant to do in this world.

And the day we were tackling Hell’s Half Mile and Lucifer, the day’s theme was (not coincidentally) “courage.” How do we find courage, and how do we overcome fear?

You may not realize this, but most of us live our lives in a state of fear. Everything we do—all of the choices we make—are motivated by fear. Personally, this trip made me realize I was operating my own company in a state of fear: I’d paid my employees more out of fear that they may one day leave, I’d bend over backwards trying to make a client happy because I was afraid of getting a bad reputation, I’d lower my costs because I was afraid of not getting the business. However, this way of operating is contrary to my true self—one that likes to be creative, boundless, and free. Thus, I had worked myself into a state in which I felt stuck in my decisions and the direction I wanted this company to go.

I see this fear in my clients as well. It usually shows its face most when the client can’t make a decision, leaving us in rounds and rounds of edits. Or when they start to play the blame game, whether they’re angry with us or their own employees for the state of their business. These actions are all born from a state of fear: What if they make the wrong decision? What if their business doesn’t succeed? Instead of tackling their own fear, though, they choose to tackle things that “feel” more in control—decisions like choosing a new logo or redesigning their website.

What were these things that felt more “in control” for me in my own company? They showed themselves in my anxious effort to make sure everyone was happy: my clients, my employees, my family, my friends. I was making lists on lists, replaying conversations over and over, and obsessing over social media posts.

And my God, was it exhausting.

The rafting retreat taught me more than I will ever fully digest, but perhaps the most important lesson I learned from that trip was to trust myself and trust the future. No matter how much I try to make sure everyone is happy and control the next step, there will always be a Lucifer boulder that pops up in the rapids. I could continue to make the fear-based decisions, which, if I had done so that day, would have entailed me hiking down the banks and staying away from the rapids. Instead, though, I chose to go with the river. What it gave me in return was a peace in my soul—a peace that told me to trust in the flow of what the world brings to me and to welcome it with open arms.

PrevPreviousCreativity is Born in Moments of Quiet
NextPeople are mad at you, Strawberry Pop Tart.Next

People are mad at you, Strawberry Pop Tart.

Kellogg’s is currently being sued because the strawberry flavor of Pop-Tart, according to the Southern District of New York, contains more apples and pears than actual strawberry ingredients. They claim it is deceptive and misleading to label the pastry with the “strawberry” moniker and are asking for $5 million in relief.